I must confess that I have been learning at the Smithsonian museums forever.
My mother went to the Baptist Church which started at 10 A.M. p on Sunday, and I was getting on the bus at that time to get to Washington DC, to be at the Smithsonian when it opened on Sunday. There are many Smithsonian Museums  so I would do the dance of which one before I departed from Alexandria , Virginia , and run happily to the museum of my choice. Mind you there is one Smithsonian museum I have never been to, but it is in New York. I intend to go there to it some day. I have former students working in the Cooper-Hewitt Museum NYC and of the museums in New York, I have never visited the American Indian Museum Heye Center (NYC)

I live within walking distance of the Mall , and so I rarely need to think about parking , weather
exceptions for that statement. 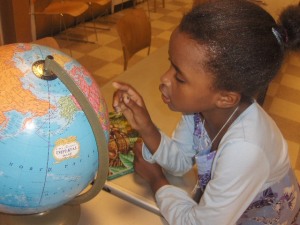 I used to have a funder who like me LOVED museums. But Jack Taub was in New York with a lot of different museums. Before he passed, we often shared the wonder of what museums can do as teaching institutions. I also had a friend John Scully who was at that time in charge of Apple and we thought a lot about museums as schools. What a wonderful thing that is. Often there are many people who never get to go to museums, or who get involved in the learning that is sustained , cultivated and nurtured by groups within the museum.
I attended the Summer Folklife Fesitval and found a way to infuse myself into a group going to India, on a Fulbright. Who knew a museum was a place to further learning and that it might be possible for me to go to India. I did and we visited about 26 cities officially, we also took a side trip to Nepal.
We were a group of teachers learning about the country of India. What a wonderful experience and extension of the exhibit that was about India on the mall. I think it was what made me geographically
interested in the rest of the world and it gave me a new perspective on cultures. We visited schools, and communities in many cities in India. We also absorbed the culture. In the mornings we read the newspapers and learned what was important in the news in India. We studied religions, yoga, the food and drink, and clothing. We learned history of India that is not a part of regular school teaching.
The Tiger of Mysore? The British influence on India. We visited museums and archeological places.
it was the experience of a lifetime for me. It is a huge country and transportation then was sometimes a bit difficult. Technology was not so widespread then. India
Our task was to collect information about the games and education in India. We visited many cities in various parts of India. I cannot tell you which was the most interesting part of India, and I cannot share my photos because I have not converted them into modern images. I was carrying a Nikon with eight lenses. I loved getting up in the morning early to go take photos before our classes, lectures and excursions. A group of us had guidebooks, and resource and we studied each city in depth before we arrived there. India is bigger than the imagination from the caves, to the architecture to the intricate weavings and the many religions.  I found the markets intriguing , and the things to buy amazing, arts and crafts, so intricate and beautiful.
The Smithsonian Taught me about Seeds of Change, two old worlds coming together.
Another stunning example of how the Smithsonian educates is the work that was done around the Columbus Quincentennary.

Examined the exchange of plants and seeds between the Old and New Worlds following Columbus’s discovery of America in 1492. Themes include the introduction of horses, sugar, and disease to the New World and the introduction of potatoes and corn to the Old World. Introductory film, on first floor, What a joy it was to be on a committee and work with Smithsonian researchers and to go to the Smithsonian for updates and involvement. Just the information about the origin of foods in the world  was quite interesting.  I even had a chance to teach and cook with kids in the museum as a teacher in the summer program and we actually had a garden, we were helped by gardeners , but we tended to the garden on the Smithsonian grounds raising traditional crops during that summer.

THere was history too, so exciting. There were real emeralds brought in and gold from the conquistadors, and the examination of the diseases that weakened the natives of America,

Sharing Our Differences;
Learning From Each Other

From Two Worlds to One World

So what does that mean to people living in the world today? Why is Columbus an important person? Why do we celebrate something that happened over 500 years ago?

Here is a place that is of the Smithsonian, and is probably a surprise to most people the SERC Learning Lab. Parents and children happily studied on the dock, we were real scientists at work.

The Sant Hall of Science

The Smithsonian Information Center in the Castle is centrally located at 1000 Jefferson Dr., SW, Washington, D.C. Ten of the Smithsonian museums in Washington, D.C., span an area from 3rd to 14th Streets between Constitution Avenue and Independence Avenue, approximately 1 mile (1.6 km)
There are convenient places to rest, to picnic to , eat,  and to learn on the outside of the museums too. I was educated by Smithson’s legacy. My schools were not so good , but the museum staff people and their work gave me a world wide education.
There are busses to the far museums, but you have to metro to the Zoo.National Zoo
The National Zoo is at 3001 Connecticut Avenue, NW, Washington, D.C., approximately 30 minutes by car or public transportation from the National Mall. Public parking is available for a fee.
Zoo directions »Anacostia Community Museum
The Anacostia Community Museum is located in Fort Stanton Park at 1901 Fort Place, SE, Washington, D.C. Free public parking is available.
Anacostia Community Museum directions »Air and Space Museum Steven F. Udvar-Hazy Center
The Air and Space Museum Steven F. Udvar-Hazy Center is located at 14390 Air and Space Museum Parkway, Chantilly, Virginia, near the intersection of Rts. 50 and 28. Public parking is available for a fee.
Udvar-Hazy Center directions
The mall is this wonderful green expanse of lawn that stretches from the Capitol to the Lincoln Memorial and I have footsteps all over that Mall. There are besides the museums, special events, and classes and outeach to teachers. So I was there a lot.  Sometimes I would go in and gaze at the tomb of the founder of the Smithsonian , James Smithson in the castle.
Here is the website to the Smithsonian. http://www.si.edu/ It has always been the A in STEM for me. So when people ask me what about the Arts in STEM I know that they have no idea of my background. The Smithsonian Museums are my learning landscape. I have taken countless children to the various exhibits, workshops and demonstrations at the museums.
My favorite thing to do in the summer used to be to take the workshops that are so powerful that they
give for teachers.My mother used to tease that she saw me standing in line in the snow for various exhibitions. Not true. Parent thought that I worked for the Smithsonian to get kids interested in traveling there. I did teach using the resources of the Smithsonian. Here is a link to the study of air and space by very small students who loved the whole experience.Air and Space