Fun at school?Games in the Classroom?  Click the link and listen to experts.

RELEVANT TO YOUR INTERESTS:

Bill Nye the Science Guy was the uncle of kids in my classroom. When I was teaching some things they would say. our uncle has some really cool lessons and games on that. Instead of getting upset, I said tell your uncle to send us some of his stuff. He had television games and laser discs and all. Not only did the uncle send things, they were waaaay cool and then he visited the classroom. That was a treat. He would send the class video clips and laser disc copies of his programs. The Nye boys were delighted that their uncle could be a part of their learning. 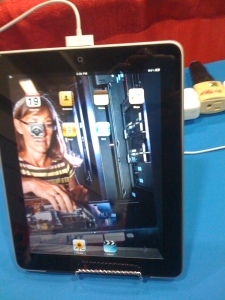 There are all kinds of games, simulations and events that kids get to experience on devices. We looked at a simulation of the oil spill on the Ipad.

Never mind that in a game it is ok to fail. When kids say that enjoyed learning or that school is fun, parents recoil sometimes. In a game you can practice, play over retain your score or go ahead of the pack. In a game it is ok to fail, it is ok to learn from others, it is ok, to go to the top and post your score. It just is.  There are kids who discover shortcuts in games and try again, again and again. I have been in schools since there was a NECC. We had meeting and learned around games, and strategies. I have been saying this since I stared with games in the classroom and have friends who know it. Never mind that I got laughed at at E3 forgetting that games are a business. What was important to me was that MIT invited me to participate in the E3 conference and so I met lots of people who were working on the concept of gaming and at the conference , so many new ideas. At the time the Department of Education was also seeking games as a way to teach, to create interest and to have students involved for in-depth learning.

When I worked for Vice President Gore, President Bill Clinton and Ron Brown, I came home one day to find 20 games that were sent to me to try out in the classroom. It was like finding a treasure chest. I thought… wow. The kids were more excited that I was. These were high level games that I would be using in outreach. The games are now old but they were at that time complicated compared to the Odell Lake Odell W0ods that we were using, and the games we made up were simplistic. But you know.. the kids were fascinated.

We started learning to integrate games into subject matter, ie. Oregon Trail, what goes with that? The search for the Northwest, Lewis and Clark, What maps do we need and who were the people who went there? Are there biographies, poems, recipes, movies, information about the culture? I even got to work on an interaction of Oregon Trail that made it complicated and more fun. Kids will let you expire in  game to see how long it takes…

Most of the first Oregon Trail Games only taught me that kids would push the limits to see how to stretch out food, clothing and the elements of weather.

But here’s the fun in games. Children that you don’t know well can demonstrate their knowledge and ways of learning. You the teacher, don’t have to entertain them. You just have to make sure that the do the other things they are supposed to do like, lunch, gym and go home.  You the teacher need to know the games so you don’t seem like a dummy. Ok, so the first several times I tried to land a plane in a game the little boys fell over laughing, but there was also a game in which we built a bicycle, a scooter, a hot air balloon and we all failed at first. It is amazing how time flies when you are trying to figure out something.

My supercomputing friends kicked up games and gaming a notch. The George Lucas Educational Foundation in its early days had some games. The students loved them. I did not have as much time as the students so I was always caching to catch up with learning of the kids. It was an interesting task. Heck it was hard, those were good games.

Games are a big feature on Facebook. Here is a passport to games in Education for you.

Read about and download the Game Design Tool Kit here.

The Learning Games Network (LGN), a non-profit spin-off of the MIT Education Arcade and the University of Wisconsin-Madison’s Games+Learning+Society Program, with FableVision, a Boston-based digital media production company, has announced the release of the Game Design Tool Kit (GDTK), a series of free online resources to help teachers integrate game design across the curriculum. LGN has also expanded its professional development program to include Inservice Training Sessions and Game Jams for middle and high school teachers beginning with the current 2012-2013 school year. Local and on-site professional development workshops, such as four-hour Inservice Training Sessions and two- to three-day Game Jams, help school districts and administrators promote successful integration of the GDTK into core curricula and existing teaching methods through new project-based strategies that engage, inspire, and challenge students’ thinking and drive a deeper understanding of new ideas and information.

Available to teachers as a free download, the Game Design Tool Kit consists of a comprehensive handbook, which includes a lesson plan guide, research and design prompts, and step-by-step instructions and discussion guides that enable educators to coach students through four phases of game design: Explore, Discover, Create, and Share. You should join and learn.