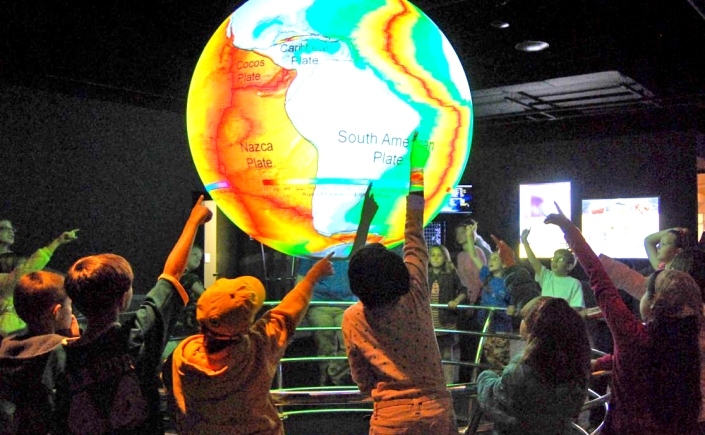 Have you ever tried to teach plate tectonics to kids? I have. I used lots of different ways to explain it. Children would yawn. I used movies, I used my hands to simulate the movement of the plates.. I used movies.

I went to the Keck Hall of Science at the Smithsonian and there was Science on a Sphere.I wanted to sit near the globe and see the program , but the kids were not moving. They sat as if they were enraptured watching the display on the globe. Wow, I thought. And then they bounced to the exhibit but many sat and sat and looked and looked.

I used to try to share this information, but ..I was never sure that kids understood it.

From the deepest ocean trench to the tallest mountain, plate tectonics explains the features and movement of Earth’s surface in the present and the past.

Plate tectonics is the theory that Earth’s outer shell is divided into several plates that glide over the mantle, the rocky inner layer above the core. The plates act like a hard and rigid shell compared to Earth’s mantle. This strong outer layer is called the lithosphere

That is how you know technology works.

This is the Science on a Sphere installation in the new Global Ocean Systems exhibit at the National Museum of Natural History. The sphere uses four projectors to wrap images around a six-foot diameter sphere.  There were four short videos on ocean system science that seemed to hold the audience’s attention. The small theater containing the sphere is a beautiful space – somewhat intimate but still connected to the broader exhibit. Lots of luck getting kids to move so you can sit down under the globe.

It is a beautiful learning space.

The exhibit answers these questions in visualization.
What best describes the ocean?
Ever-moving body of water?
Dramatic, yet hidden and slowly changing landscape?
Source of at least half of Earth’s oxygen?
Chemical mix of every element?
The ocean is all this and more.

The multi-media experience—“Science on a Sphere”—includes four programs that highlight complex aspects of the ocean.

This huge, interconnected system comes to life on a six-foot sphere at the center of the Global Ocean Systems gallery. The multi-media experience includes six programs that highlight complex aspects of the ocean. Data from global ocean observations play on the sphere’s surface, providing a space-age perspective on the ocean.
ocean.si.edu/ocean_hall/Galleries/global_ocean_systems.html
Immersive , virtual reality based programs like this are yours to share on the desktop now. You can do a flat screen projection of this program.

Science on a Sphere Explorer is now available for download.

It is a program that you can load onto a PC or Mac, and then manipulate a 3-D view of the earth with the same kinds of weather, geological, environmental, geographical and astronomical visualizations, some with interactive displays, that are used on the spheres in museums around the world. Articles about the new program do alert us that it is a big download (it’ll require around 15 GB on your hard drive), so if you’re interested do make sure there’s plenty of space on your system.

I’ve included links here to a brief news article about the program, which includes several still and animated examples of the kinds of data you can display with it, and to NOAA’s “SOS Explorer” home page, where there’s more info and a link to download and install the program.

For folks who got super-excited when Google Earth came out, here’s another 3-D model of the world with similarly awesome potential. It’s called the Science on a Sphere Explorer, and it lets you view tons of animated planetary data, from the age of the sea floor to the airborne migration of CO2 to hurricane tracks dating back to 1950.

Science on a Sphere is a NOAA tool that projects different layers on a huge ball, creating a virtual earth you can walk around in museums and classrooms. It’s now available as a desktop program for Windows and Mac, so you can probe natural (and unnatural) phenomena from home in popping, 1920×1080 resolution. Be warned it’s a huge download that eats up to 15 gigs of hard-drive space, though those willing to be patient will reap fantastic rewards.

Here are a few of the ways you can explore the planet. Note you can rotate the screen to find and zoom in on any spot on earth. This is the basic Blue Marble view with real-time clouds—peep all those hurricanes in the Pacific:

Go here to see all of these remarkable graphics.
Hurricane tracks from 1950 to 2005 color-coded by strength, red being the strongest and blue being tropical storms and depressions:
Density of cropland:
The atmospheric transport in 2006 of various aerosols like dust (red-orange), carbon (green), sulfates (white), and sea salt (blue):
Satellites and space trash circling earth (this one’s really fun to zoom in and out of):

A nearly real-time map of earthquakes: 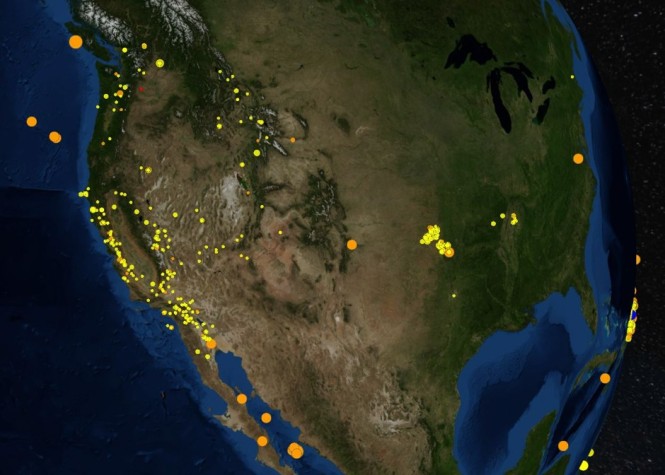 The educational material created to support SOS is available here, including scripts, lessons plans, and evaluations.